Wow, that’s a lot of petitions!

You should have seen their faces…

I was there on your behalf testifying in support of this important pro-gun legislation. 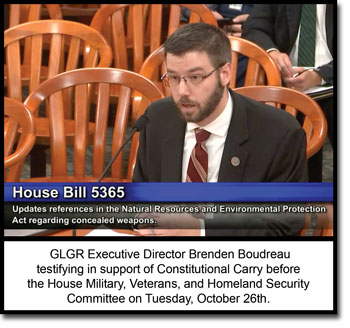 As you know, Constitutional Carry simply allows anyone who can lawfully possess a pistol in Michigan to carry it, openly or concealed, without first having to obtain a permit.

Right after the hearing, my staff and I delivered more than 20,000 of your petitions to your State Representatives urging them to support Constitutional Carry.

Staffers for both Democrat and Republican State Representatives were overwhelmed by the piles of petitions they were receiving.

With new legislative maps being drawn by an “independent” redistricting commission for the first time, lawmakers in both parties are especially susceptible to grassroots pressure because they are going to be facing a new district of voters for the first time next year!

That’s why this is the perfect time to be pushing for a vote on Constitutional Carry.

Every lawmaker is looking over their shoulder for potential primary and general election challengers, many of whom are already calling for Michigan to become a Constitutional Carry state.

And there’s no better way for them to show their support than to vote for it on the floor of the House of Representatives.

Chairman LaFave mentioned at the end of the hearing yesterday that he plans on holding a vote next week on HB 5364-5367.

Make sure the committee has the votes for passage by sending them an email by clicking here.

Unfortunately, once the bills pass out of the House Military, Veterans, and Homeland Security Committee, it is likely to be sent to the House Judiciary Committee, chaired by State Rep. Graham Filler (R-HD 93), where Constitutional Carry was sent to die last year.

For the last two legislative sessions, House Republican leadership has been overly timid when it comes to fighting for your gun rights. Gone seemingly are the leaders of the 2017-2018 legislative session who brought Constitutional Carry to the House floor for a vote, despite limited opposition in the Republican caucus.

Instead of fighting for bold pro-gun legislation, they bury Constitutional Carry two committees deep and bring menial gun bills to the floor that pass with overwhelming bipartisan support.

That’s why it is incumbent upon us to give the House Republican leadership resolve to actually fight for Constitutional Carry — rather than sitting back on defense hoping nothing bad happens.

Thank you for your continued activism and support! Stay tuned for more updates and opportunities to help!