Did you hear the news?

Thanks to your more than 16,000 emails and countless phone calls to your State Senators, the Michigan Senate rejected Gov. Whitmer’s appointment of anti-gun former Grand Rapids Mayor George Heartwell to the Natural Resource Commission. 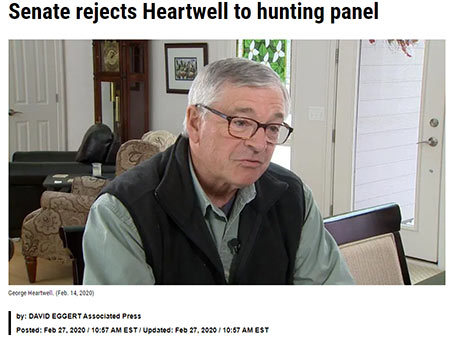 The vote was near party lines, with only Republican State Senator Jon Bumstead of District 34 joining Democrats in supporting Whitmer’s appointment.

As you know, Heartwell had a long track record of opposing the the Second Amendment and even flagrantly violated our state’s preemption law when he tried to enforce an illegal anti-gun ordinance in Grand Rapids.

Not only that, but he was a proud member of Bloomberg’s “Mayors Against Guns” and even went on to start his own chapter of one of Bloomberg’s gun control groups after he left office.

Great Lakes Gun Rights members and supporters led the charge to block Heartwell’s appointment by making our anti-Heartwell meme go viral on Facebook, which reached nearly a half million people.

I spoke with reporters at MLive, Wood TV8, and WZZM 13 soon after our campaign against Whitmer and Heartwell kicked off, giving them the dirty details about Heartwell’s open hostility to the right to keep and bear arms.

And through our grassroots activism tool, you sent more than 16,000 emails to State Senators calling on them to oppose Heartwell’s appointment.

The Republican-controlled Senate heard you loud-and-clear and sent Heartwell into early retirement from the NRC after only being on the commission for a short three weeks.

Kudos to you for giving your State Senators the political courage to stand up for the right to keep and bear arms.

None of this would have been possible without your rapid response to our call to action.

Thank you for your activism and your support. Truly nothing that Great Lakes Gun Rights does would be possible without you.