In a move reminiscent of Nancy Pelosi in Washington, D.C., Michigan House Republicans declared Constitutional Carry dead without even raising their eyes.

The abuse of the Michigan House legislative rules is well documented in Lansing.

I won’t bore you with the details, but suffice it to say, Republican leadership scripted the death of Constitutional Carry before it even came up for a vote.

In fact, your Representatives weren’t even given a chance to vote on it as Speaker Wentworth, Speaker Pro Temp. Pamela Hornberger and Majority Floor Leader Ben Frederick declared it dead before the sun even rose yesterday morning. 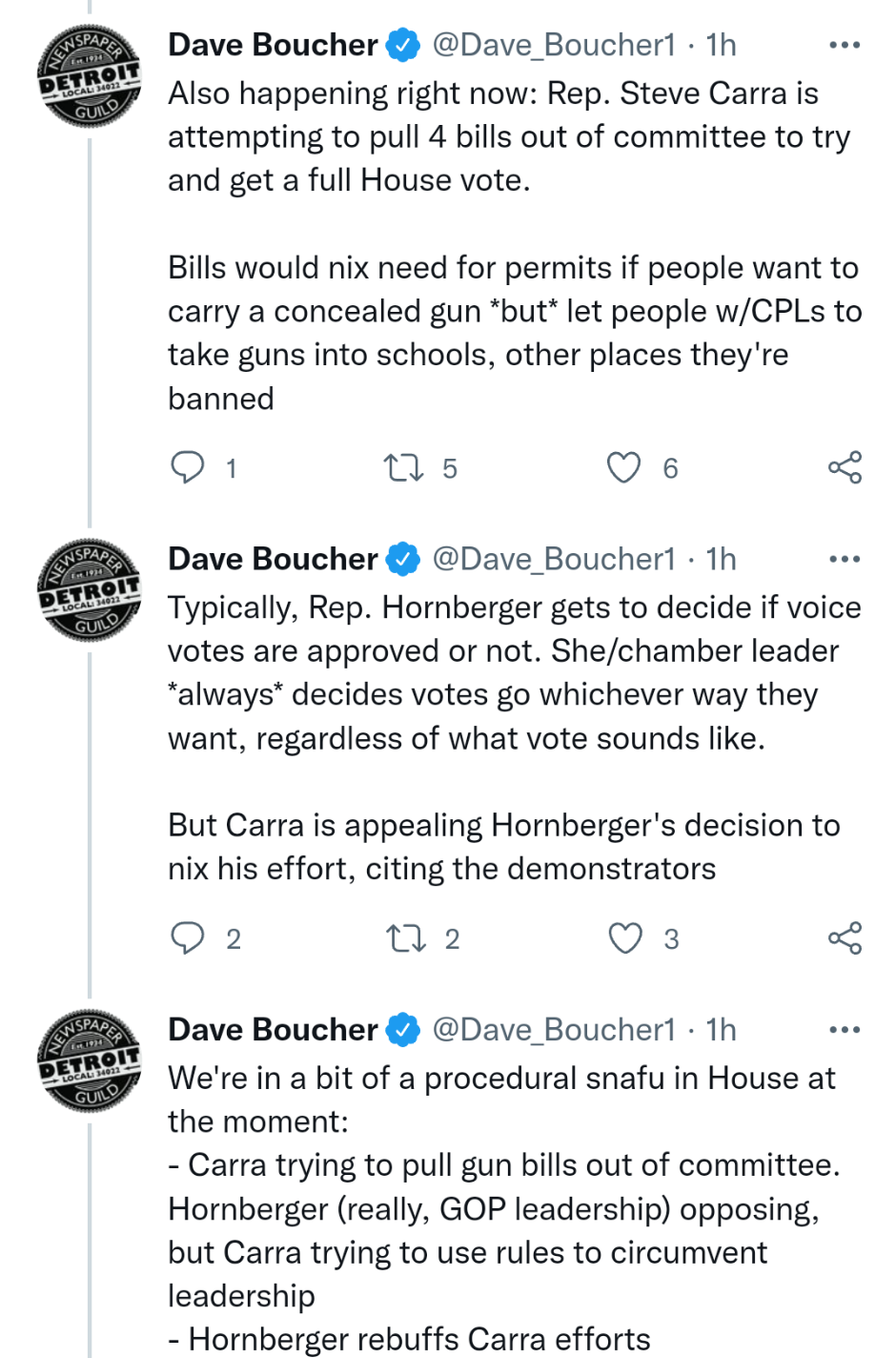 I wrote you on Tuesday to let you know that State Rep. Steve Carra gave notice of his intention to discharge Constitutional Carry from committee for a vote on the House floor, a right that is protected by the Michigan Constitution.

And as leadership’s script dictated, Constitutional Carry was immediately deemed to have no support (despite overwhelming survey responses from House Republicans saying they support).

This move by Rep. Carra wasn’t extreme. It wasn’t out of order. It’s in the rules and the Constitution. This is everyday business.

But rather than expose their gun-grabbing colleagues, House Republican leadership kowtowed to the gun control lobby (and Governor Whitmer) by yet again killing Constitutional Carry without so much as a vote.

I can already guess that Speaker Wentworth will try to use Rep. Carra’s efforts to punish the gun rights community by continuing to refuse to bring Constitutional Carry to the House floor for a vote.

But mark my words, there are numerous Republican incumbents who have primary challengers supporting Constitutional Carry who will soon be criticized for doing nothing while House Republican leadership trashed your gun rights.

It’s time for Lansing Republicans to have a wake up call, that continuing to ignore the gun rights community’s calls for Constitutional Carry will come at a political cost.

There’s no excuse for Republicans to not pass Constitutional Carry in this political environment other than to protect weak-kneed Republicans and to keep a “cordial” relationship with anti-gun Democrats.

Whose side are they on? Governor Whitmer’s or gun owners’?

While we didn’t get our vote on Constitutional Carry, we still made progress in our efforts to hold Republicans accountable for stonewalling this pro-gun legislation by exposing their legislative tyranny.

We must now send a clear message to Lansing that House Republican leadership can still make things right by holding votes on Constitutional Carry or the Republican caucus will be held accountable for killing it once again.

The choice is theirs.

But you have a voice in this too, and you can start by clicking here to send an email to members of leadership who are responsible for blocking the vote.

If you want to draft your email, you can say something like:

Thank you for your continued activism.

Michigan will only join the 25 other states with Constitutional Carry laws with the help of pro-gun patriots like you!

Please forward this email to your pro-gun friends and family to get them involved in this fight!

And then please consider chipping in $30 or even $10 to help us grow our grassroots army during this crucial election year.

Michigan law enforcement officers may soon be tasked with enforcing the first wave of gun control coming out of the Biden White House.The ATF’s new regulations and the most broad gun control bill passed in 30 years are going into effect and the gun grabbers are...

In the wake of the incomprehensible evil perpetrated by the killer in Uvalde, Texas, anti-gun politicians and their cohorts in the media are mobilizing to enact more gun control.Gun control that you and I both know will only punish gun owners while failing to address...

The Michigan Legislature is quickly approaching the summer break where lawmakers will head home for a couple months leading up to the August primary elections.As you recall, back in February Senate Majority Leader Mike Shirkey renewed his promise to give a committee...

Will he kill it again?

I need your help.You see, the four-bill Constitutional Carry package of House Bills 5364-5367 was recently advanced out of the House Military, Veterans and Homeland Security Committee.But instead of advancing to the floor, the bill package was sent to the House...